After running C64 BASIC on a microcontroller, in a Docker image and also on the console, I thought, why not on an iPhone?

My idea is to create an iOS app for the output and an input field for the commands. I send the commands to a C64 BASIC interpreter and read the output to display it in the app. I adjust the color and font and then I will have a C64 on my iPhone. 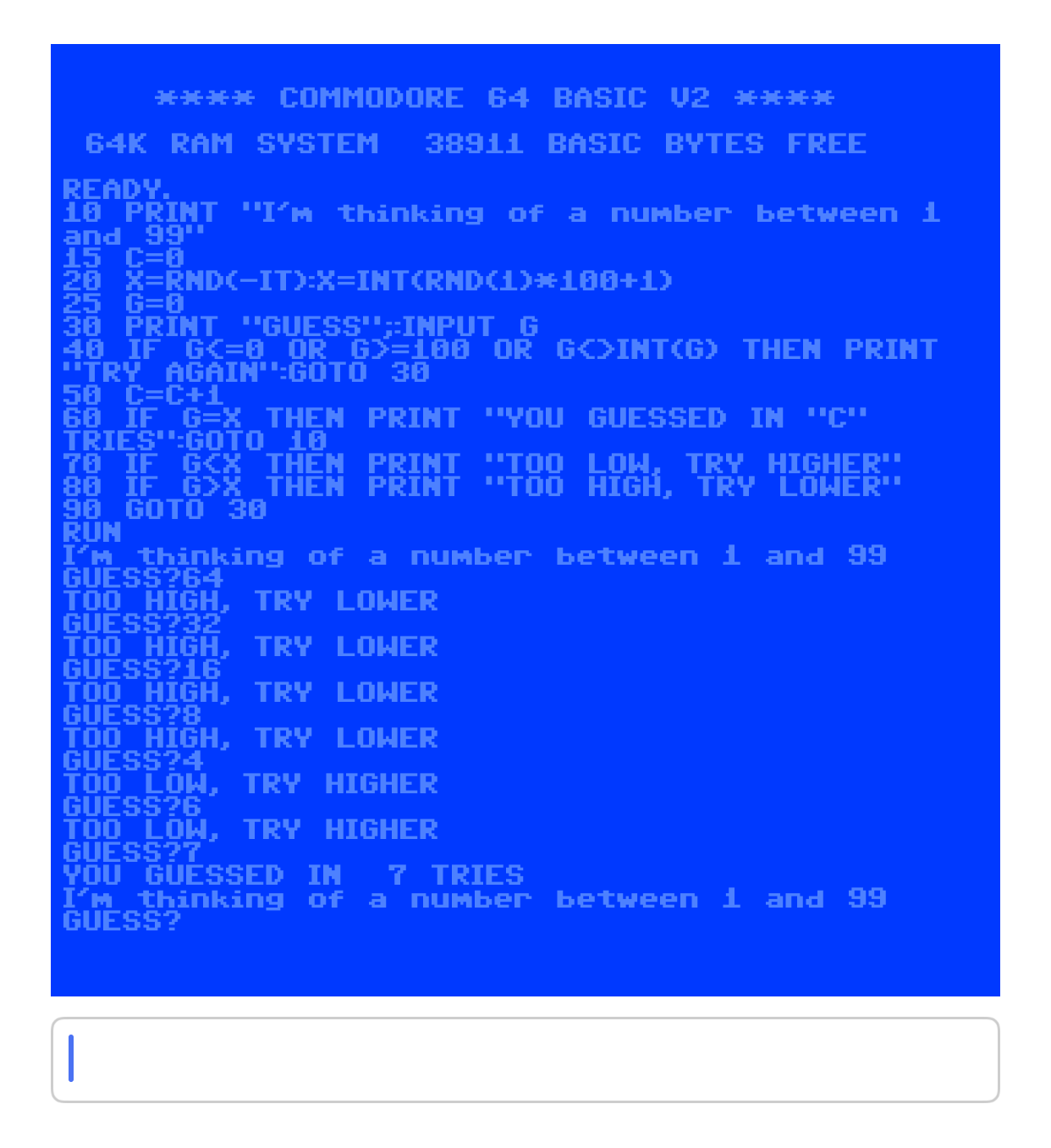 At the end I wrote two apps because I had two libraries with a C64 BASIC interpreter, and each library has an advantage over the other one:

The project started 11 years ago, and the last activity was 6 years ago. As you can read in the README file, any code is completely native. But and this is a very big disadvantage, the code was generated (with LLVM), and therefore everything is in one 1.8 MByte file - Xcode doesn’t like that. The whole interpreter runs in the main function, in a single loop, and the file has 3222 goto commands. The code is not readable.

The good thing about this project is, that some code is separated into own functions. This allows me to hook into the input and output handling.

The advantage of this project is the extensibility. You can add your own BASIC commands and activate them with the SYS 1 command. As an example, Bill Gates’ Personal Easter Eggs in 8 Bit BASIC was implemented. If I think further, this could be an opportunity to communicate with iOS and call from BASIC some Swift code.

I don’t know if you need to know 6502 assembler code, but it’s fun. The c-simple-emu6502-cbm project is a month old and it emulates a 6502 processor. Every 6502-assembler command is implemented in C. The LDA (Load Accumulator) command with the opcode 0xA9 is implemented like this in the emu6502.c file:

In case of 0xA9, the SetA method is called with the return value of the getIM method. The ‘IM’ stands for immediate addressing and returns the value after the PC (program counter).

The p_bytes value is added to the PC at the end. It is set to 2, because the operator requires two bytes. One for the LDA command and the second for the value that is passed.

The SetA method sets the value to the register A (accumulator).

This command influences also the flags Z (zero) and N (negativ). Therefore, the SetReg method checks the value. If it is null, Z is true and if it is negativ (bit 7 is high) the N flag is true.

The 6502 Microprocessor Instant Reference Card is an old but also beautiful document. Isn’t it nice?

To integrate one of the C64 BASIC interpreters I have created an iOS framework. The article Xcode: Frameworks and Wrapping a C Library in a Swift Framework describes the necessary steps to create an iOS framework project. See also What are Frameworks?

The iOS app is responsible for input and output. It uses a UITextView with C64 colors and a C64 font for the output and a UITextField for the input. The C64 BASIC interpreter is part of an iOS framework, which provides the interface for sending and receiving data of the iOS application. The interpreter receives the input data and returns the output. An Objective-C wrapper is used for this.

The figure shows the files for the example c-simple-emu6502-cbm, they are similar for the cbmbasic project. The Swift application communicates with the Swift interface of the iOS framework. This one with the Objective-C wrapper and this one with the C64 BASIC interpreter.

The iOS app starts the emulator with the run command. The user input is sent with the cmd method. The read method reads the C64 output.

The Swift interface implements the run, cmd and read methods. The run method calls the C64_Init method with the ROM file names. Additionally, it calls the MyResetRun method, which is a simple wrapper method — otherwise I would have had to deal with function pointers of the original method. The cmd method writes the user input into a char array, and the read method fetches the C64 output data.

The CBM_Console_ReadChar function loops and looks if there is something new in a command buffer and then sends the character back as “keyboard input”. This allows me to write from the app to the framework/lib via Swift, Objective-C and C into the buffer. To prevent the battery from burning 🔥 out I have a sleep in the while loop. Otherwise the CPU would be at 100%. The writeChar function writes the C64 output into a char array, which is implemented as a ring buffer. I fetch the output characters in the app with the read method and display them. The app runs a timer which reads the output every 100 ms. Since there is no trigger within C64 BASIC that signals an end, I read the output buffer continuously.

To make the application look like a C64 I have modified the colors 🎨 and font. But the feeling of a C64 is not possible with a touchscreen. Did the C64 keyboard feel like a mechanical keyboard, only clunkier?

The document Adding a Custom Font to Your App describes how you can change the font of your app. I found two fonts and choose the first one:

I adapted the foreground and background color based on the Wikipedia: List of 8-bit computer hardware graphics — C64 image. I’ve selected the colors with a pipette.

The iPhone app runs within a sandbox; therefore it is not possible to simply access e.g. “basic” as a file. This file is located somewhere in the file system and it must be part of the build target to access it. Bundle.main.path returns the path of the file and with this the CBM library can open the file. This can also be used to start the emulator with a C64 program.

Both interpreters were designed for the console, they just print the output. However, they do not handle the memory of the monitor, which is in the 0x0400 range (see Screen RAM). The graphical output is also not possible. VICE is an emulator which supports it but isn’t available for iOS.

Another interesting project is the flooh / chips project on which the C64 Docker image is based, which I mentioned in the Dockerfile FROM AS — C64 Emulator blog post. I will take a closer look at this project, because different emulators (e.g. Z80, CPC) run in the browser as WebAssembly.

But it’s enough for now. I have two iOS apps with different C64 BASIC interpreters:

In an upcoming blog post I will take a look at the RND function.

People were saying that I always had my head in the clouds […] and that I wasn’t able to concentrate. I ...

> A pseudorandom number generator (PRNG), also known as a deterministic random bit generator (DRBG), is an ...